Terminator: Dark Fate, Earth 2041 A.D. Humanity is on the brink of extermination as Terminators and Machines roam the planet seeking to terminate what’s left of humanity. Brave individuals form Resistance groups to battle for the limited resources that remain and fight back against the Terminator machines.
Download APK
5.0/5 Votes: 1
Report
Developer
Firefly Games Inc.Version
1.2.16
Updated
January 16, 2020Requirements
4.1 and up
Size
37MGet it on

Terminator: Dark Fate, Earth 2041 A.D. Humanity is on the brink of extermination as Terminators and Machines roam the planet seeking to terminate what’s left of humanity. Brave individuals form Resistance groups to battle for the limited resources that remain and fight back against the Terminator machines.

In this dark future, YOU become a leader of the Resistance -establish, build, and upgrade your own hidden Resistance Base, recruit and upgrade troops, research new technologies, and forge relationships with other players in order to defend and expand your territory.

Build your Resistance base and raise an army to save the future of humanity as you battle enemies and Terminators from across the world in real-time! You can’t win on your own, so join an Alliance and call your allies to unite with you to fight against the Terminator machines and other competing human factions in PVP wars and events. And never forget: the future is not yet written.

◆BUILD YOUR OWN RESISTANCE BASE
– Recruit and train over 30 unique types of troops to support your Milestones!
– Construct and upgrade dozens of buildings that provide buffs and resources for your troops!
– Research new technologies and abilities to upgrade your weapons and enhance your battle tactics!
– Build and evolve your own Terminator (Cybernetic Unit).

◆FORM AN ALLIANCE WITH OTHER SURVIVORS
– Join an alliance, make friends, and chat with players from around the world in real time!
– Help each other, build and expand your bases!
– Rally together to take down enemies you could never face alone!
– Expand your Alliance territory to unlock exclusive contents and bonuses!

◆BATTLE FOR THE FUTURE
– Grow your alliance territory for richer rewards and resources!
– Destroy patrolling Terminator Machines for their parts and to secure your territory.
– Explore a sprawling Sector Map littered with pre-war ruins, resource caches, and more surprises!
– Build an army that achieves renown across multiple sectors!

◆BECOME A LEGENDARY RESISTANCE COMMANDER!
– Sweep the battlefield in huge real-time Player Vs. Player matches!
– Absorb other bases under your influence as you expand your territory!
– Capture the Time Gate to become the Leader of your Sector and earn exclusive powers and privileges!

Terminator: Dark Fate is the official, free-to-play, real-time strategy war game based on the 2019 feature film. Start playing for free today and we’re sure that YOU’LL BE BACK! 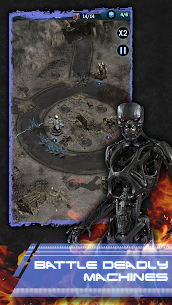 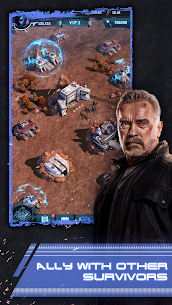 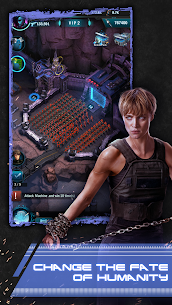 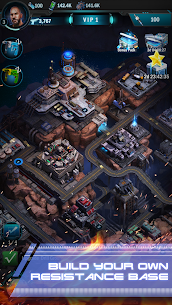 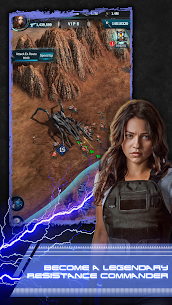